Its presidents day and everybody is bashing Trump.

I really like it; Taking a day where we are to celebrate our historical presidential lineage just to tell Trump that he’s an ass wipe. You got damn right Trump, today we are reflecting on how your inconsiderate, bald headed, just got a tan at 7am looking ass needs to get out of office. I can say all of this because I voted.

With the new release of Black Panther, it has me wondering where the hell all of these niggas were at when we had a chance to not vote in a racist son of a bitch. This is what we have to deal with and I will continue to talk about how much I hate trump due to his cry baby antics, misleading the public, and being totally aware all of this is happening but not giving a shit.

What makes things so fucked is that if Obama were caught up in a cheating scandal, had several divorces, and was in collision with the Russians, WHITE America would’ve had him thrown out before they could take him to court. This racial divide we have here in the States is troubling and for our kids that are growing up having to live through all of this makes no sense.

This is how we continue reliving the past in the future. We need better leaders and a more educated populous. But good leaders come from an educated populace so let’s focus on that first instead of Matt Bevins forcing schools to have Bible study. America has literally become the most laughable country in the world. Why should I be so proud to be American but as the same time be so oppressed? 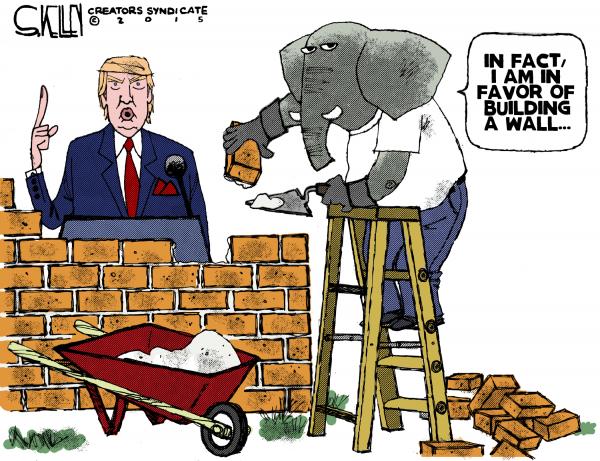 Like the rest of the logical thinking Americans here in the US, I oppose the wall that President Trump wants to build. I’ve heard people say time and time again how much of a great idea this would be but honestly it makes no sense. Yes, people from mexico cross the border every day entering this country illegally but really, do you think a large wall is going to stop them from coming over? Plus did you folks not hear about how some of the wall will just be fence? So in essence, that amazing wall that this dumbass in office plans to build really isn’t going to stop or change anything.

What really rubs me the wrong way about Trumps “Wall” is the fact that he claims that Mexico will pay for it. … Now if that isn’t complete utter bullshit than I don’t know what is. That’s like Canada building a wall and telling us to pay for it. I bet y’all would get really pissed about that huh? Talk about a double standard.

Now for those of you that are cursing at your phone or computer screen, telling me to go to hell, that is fine. I accept the fact that you are blinded by a false dream that America will be great again, but to be honest, in order to be “Great Again,” you have to acknowledge that America isn’t in the best shape. You have to acknowledge that the version of America that you want isn’t coming back. You have to realize that Millennials and Generation Z will overthrow the old heads in office because the predicament that we are in right now isn’t going to be changed by some unqualified, fascist president who think that bringing warehouse work back to America is going to change the future.